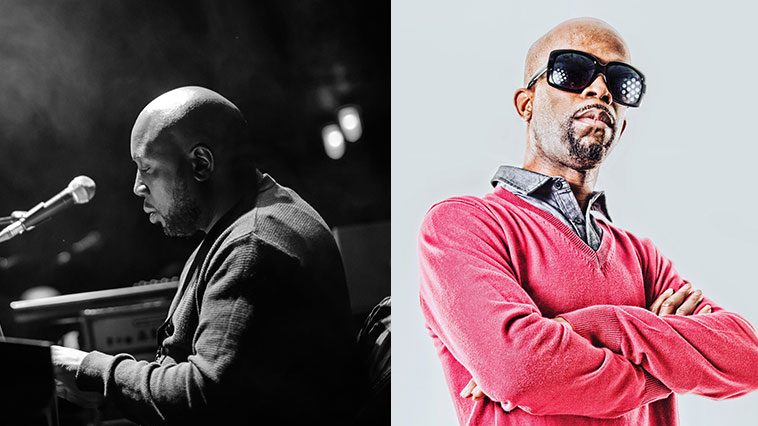 Marlene Cato catches up with Luke Smith and Marcus Johnson – two very different music producers – and asks about their lives to get an insight into what they are passionate about and what motivates them.

Biography
Coming from a family of musical maestros, his mother, Ophelia Smith – a critically acclaimed gospel singer -and his father, Vassell Smith, started playing guitar around his homeland of Jamaica, and continued to play when he arrived in the UK on the Windrush in the 60s.

Learning to play drums and keys in church, Luke went on to become one of the UK’s top session musicians. While at music college, he began his professional career, playing keyboards for a group called ‘Distance Cousins’, who were signed by Virgin Records. Luke went on to play for jazz giants, such as Roy Ayers, Hugh Masekala and Earl Klugh.

In 1992, Luke was touring with Hot Chocolate; he was Musical Director of the hit Broadway production ‘Mama, I Wanna Sing’ with Chaka Khan; held a longstanding role as keyboardist in George Michael’s band, including the ‘25 Live’ tour, over the course of a 49-date tour in 11 different countries, and then at the new Wembley Stadium in 2007.

By 2016, Luke was the MD working on sell-out concerts for amazing duo, Floetry.

Luke Smith has co-written and produced for five-time Grammy award winner, the late Amy Winehouse, as well as writing and producing for The SugarBabes, Liberty X and Miss Dynamite, to name just a few.

On gospel artists, Smith has produced albums of Noel Robinson and Raymond & Co. Smith’s keyboards are also on albums for Mark Beswick, Roger & Sam, Clif & Marie and BeBe Winans. He has also written and produced advert and TV theme tunes, including tunes for the hit show, ‘Sounds of Gospel’ and, most recently, the UK government’s TV short film, Modern Slavery. Luke has recorded with BB King on ‘The Thrill Is Gone’, and recent string arrangements with Stormzy. Amongst the who’s who of multi award-winning artists, is there anyone Luke hasn’t worked with?

This realisation became definite at the age of 17, when I did my first tour in USA with the MerryBells Gospel Choir.

The first Instrument I played were the bongos, bought by one of the deacons of the church. I think he recognised my tambourine skills, lol. From there, I went to the drums and eventually to the keyboards.

What was a major event in your life that was significant to who you are today?
I can’t say there is one major event as, throughout my career, there have been quite a few times where I’ve undergone a baptism of fire, and I thought I wasn’t gonna make it, but through the pressure and struggle I grew, and it changed my mindset for the better. I would also include working with Chaka Khan, and going on a world tour with the late George Michael.

How important is your Christian faith to you, and what would you like to say about your faith?
My Christian faith is everything to me. Without it, I don’t think I would survive. There are up days and down days within this industry, and having the faith that those doors will open is very important.

Once you understand the Scripture, ‘Faith is the substance of things hoped for the evidence of things not seen’ (Hebrews 11:1), it causes you not to look at your circumstance, but allows you to know who you are, and that God has the final say. So doors open, but you did nothing to deserve it, or you did nothing to get through the door, you just realise God’s favour was on your life.

If you could offer some advice to producers at the beginning of their
journey, what would it be?
Try to make music that will translate to the masses. Melody is king. Research and learn the business, understand how publishing works, and get a good music lawyer.

Biography
Having started out singing with world-renowned gospel choir LCGC in 1984, Marcus moved on to working in bands, and songwriting with friends Bryan Powell and Mark Beswick, and ended up winning a couple of gospel songwriter awards. Alongside Steve Campbell, Bryan and Mark, Marcus also worked with the young Fay Simpson, Robert Anderson and Andrew Smith, and they started doing shows supporting the likes of USA’s great Richard Smallwood and Bebe & Cece Winans, and main stage at the Greenbelt Gospel Festival with Sounds of Blackness.

In the late 80s, Marcus tagged along with Bryan Powell to LA, who at this stage was signed to BMG Music Publishing, learning from gospel legends, Daryl Coley, Earth Wind and Fire, and the great Jam & Lewis. In the early 90s, Johnson returned to the UK and with Steve Campbell, and formed a production partnership called The Ethnic Boyz. They had success with The Escofferys, a group that was signed in the USA to Atlantic Records, and with a group called Rhythm ‘N’ Bass, which consisted of the young Wayne Hector and Ali Tennant.

This got the attention of Peter Thomas of Real Housewives of Atlanta, who then put The Ethnic Boyz into the studio to take their tracks to another level. Consequently, the Boyz were signed to Sony UK and had some success in the UK charts. A meeting in the early 90s with A&R Colin Barlow led to the UK group, Nu Colours, being signed. Marcus, with partner Steve, has worked with Beverley Knight, Jazzie B, Soul II Soul and Damage, with whom he had a UK top five hit with the song ‘Forever’, which was also used in a movie.

Johnson has a keen eye to spot talent, and has worked with A&R giants such as Steve Marshall, signing groups like Truce, a trio put together with his brother, Lawrence Johnson. Johnson’s prolific career and catalogue secured him a publishing deal with Universal Music, with lots of hits in the early 90s. He continues to mentors, write and produce for a number of artists.

What age did you first realise you would like to be in the music industry? What was the first thing you remembered doing?
It was in a home studio and I was about 16. It was an instrumental track. When I was five years old or so, my dad bought me a guitar, I guess because he was a guitarist himself. In fact, for a very short time, I had guitar lessons with Bazil Meade, but he told my dad that I wasn’t interested in the guitar, so I ended up on the keys.

What genre of music really excites you, and why?
I like all genres of music, as long as it’s good. I don’t like metal, lol.

What have you learned about being in the music industry?
Your skills can get you into a room, but they won’t keep you in the room!

What was a major event in your life that was significant to who you are today?
Producing The Escofferys Opinion album, along with Steve Campbell in 1990. They were then signed in the States to Atlantic/Warners Records. Marcus co-wrote the majority of their album, which had success in the UK and US, leading to the first UK Gospel hit in the Top 20 US Billboard-RnB Charts. This led to major UK labels knocking at their door. Also Jimmy Jam and Terry Lewis have been a big influence on my career.

How important is your Christian faith to you, and what would you like to say about your faith?
My Christian faith is everything. It starts and ends with faith for me. It’s the centre of everything, and the driving force behind what I do.

If you could offer some advice to producers at the beginning of their journey, what would it be?
Be yourself. Don’t let knockbacks discourage you, but use them as inspiration to better yourself. Learn as much as you can about the industry. Think outside the box.

What other Christian producers do you admire?
I respect everyone who does this (producing), because it isn’t easy to do this year in, year out.